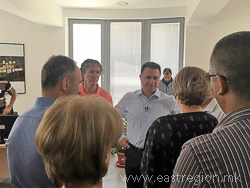 The total investment of the center “Creativa” is worth 484,302.14 euros of which 149,320.29 euros from IPA funds received through cross-border cooperation with National reading room “P.R.Slavejkov 1938” village Breznica. Municipality of Stip co-financed 186,761.85 euros.

Multimedia center, built on the site of the old summer cinema in Stip, as Mayor Ilco Zahariev said in conversation with Mr. Gruevski to accommodate 3D cinema cluster creative industry of East Planning Region, the offices of the Centre for development of East Planning Region and there is a conference room as well as room for cultural and artistic event.

Аround multimedia center whole area is completely settled, all the streets are completed, the park “Brioni”, a football field and a mini zoo.

Mayor Zahariev informed VMRO-DPMNEs leader that this project has been declared the most successful of the second call for IPA projects in cooperation with Bulgaria for what they expect to receive recognition.

In conversation with Gruevski Zahariev said that within the cultural facilities being built in Stip is an ongoing tender for construction of the park “Makfest” investment of 130.000 euros which the Centre for Development of East Planning Region provided by the Regional development – Ministry of local Self-Government and regional development Bureau. He emphasized that the project all the previous winners will receive a star and permanent record.

Within the building infrastructure expansion in Stip built in the settlement Senjak, the ongoing construction of a double tennis court which according to Mayor Zahariev should be ready by the end of August this year. The investment is worth 12 million denars. 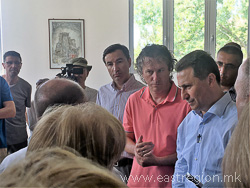 Construction of sports facilities, as highlighted in the conversation of VMRO-DPMNEs leader Gruevski and Mayor Zahariev, is under serious investments the Government of the sports facilities in Stip so far by the Agency for Youth and Sports has invested 1.5 million euros. Built the football field “Nikola Kljusev”, four tennis courts, equipped with playgrounds with artificial turf was built and hall “Jordan Mijalkov” as well as two multi-purpose courts. Currently building tennis courts and a fitness area. 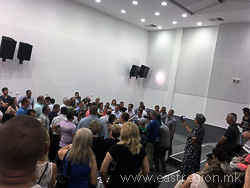 Gruevski in the conversation pointed Zahariev that within the investing heavily in sports and sports facilities with the functioning of the football academy in Stip is good to consider the possibility of building a tennis academy and if there is interest from young people attitudes to open in this city an tennis academy.

Mayor Zahariev, inter alia, informed the President of VMRO-DPMNE Nikola Gruevski that according to the great interest of the citizens of Stip in the tennis courts there are plans to build a playground for beach volleyball.