Preparation of feasibility studies for development of ski tourism in the mountainous areas of Belica, Bulgaria and Makedonska Kamenica, Macedonia 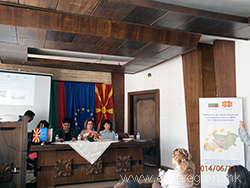 Promoting cross-border cooperation between Republic of Macedonia and Republic of Bulgaria. START OF THE PROJECT “Preparation of a feasibility study for development of ski tourism in the mountainous areas of Belica, Bulgaria and Makedonska Kamenica, Macedonia- GetReadyforSkiing.

On June 11, 2014 (Wednesday) at the Conference Hall of the Municipality of Belica, Republic of Bulgaria, the first press conference for the project GetReadyforSkiing was held. To a large number of visitors, working in the filed of promotion and tourism support, there was presentation above the activities envisaged under the project.

Future feasibility studies supplied estimates for the impact on the environment, is expected to make a major contribution in the utilization of natural potential in the direction of the countr rapid tourist development, with special emphasis on the development of winter tourism, trails for alpine and nordic skiing on Osogovo mountains , which will be first step for realization of future development projects for modern tourism infrastructure in the border region.

Development of winter tourism in the Municipality of Makedonska Kamenica, Kocani and Kriva Palanka, and municipality Belica, is expected to make a significant contribution for economic development, enhancing the quality of life, higher standard for local people.

The project has a duration of 12 months, is funded by the European Union, IPA Programme for cross border cooperation between Republic of Macedonia and Republic of Bulgaria, CCI Number 2007CB16IPO007. It is in implementation process on the territory of the East Planning Region of the Republic of Macedonia, and the region of Blagoevgrad, Republic of  Bulgaria.